Kevin Bacon Reveals the Secret to a Lasting Hollywood Marriage 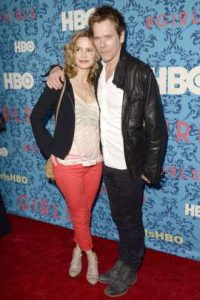 With celebrity marriages melting down faster than an ice cream cone in the Hollywood heat this summer, finding an A-list couple that’s been together longer than a decade is increasingly rare.

Kevin Bacon and wife Kyra Sedgwick have beaten the odds so far with almost 27 years of marriage under their belts, and when ET caught up with the actor on Tuesday at the junket for his latest film, police thriller “Cop Car,” he spilled his secret to a long-lasting Hollywood union.

“Whatever you do, don’t listen to celebrities on advice on how to stay married,” Bacon teased. “That’s my secret.”

Bacon’s other secret to keeping your head on straight in Hollywood seems to be a sense of humor, especially about his last name.

“You have the last name Bacon, stuff comes up,” he laughed. Full story.