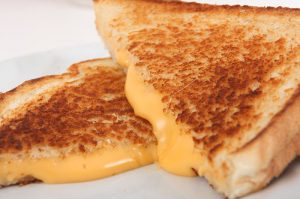 Here’s yet another reason to love grilled cheese: Fans of the ooey, gooey sandwiches have more sex, a new study has found.

Thirty-two percent of grilled cheese fans have sex at least six times a month, versus 27 percent of those who don’t like the sandwich, according to the dating and social-networking site Skout, which released the findings before National Grilled Cheese Day on Sunday.

What are you having for dinner tonight?