How Divorce Affects Children of Any Age 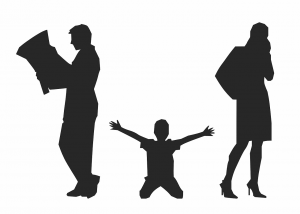 When a child learns that his or her parents are getting a divorce, it can be alarming, frustrating, confusing, and quite upsetting.

These emotions are normal and are not solely reserved for children and adolescents; adults can experience a spectrum of emotions as well when realizing that their parents, after all of the years, are getting a divorce.

While children may be more physically affected by having to spend time at two homes and be split for holidays and summers, adults of divorcees may be impacted in other ways that are potentially just as hurtful.

So how does divorce really affect children (young or adult) emotionally, intellectually, physically, and spiritually?

What are the contributing factors to whether or not someone will have a more difficult time with going through their parent’s divorce?

Should people stay together in order to avoid potentially harming their children?

Some say that you should never stay married just for the sake of your kids.

Others say that kids are resilient and that divorce has little long-lasting effect.

The research indicates something far different.

Let’s break this up into three categories and touch on how divorce can affect both young children and adult children.

We’ll look at the psychological, physical, and spiritual aspects.

The Psychological Effects of Divorce on Young Children

Unfortunately, the psychological effects of divorce on young children can be extensive.

There is so much research on it that it has been added to the list of ACEs (Adverse Childhood Experiences), which are potentially traumatic events that occur in childhood.

Other ACEs include neglect, drug abuse in the home, rape, etc.

The following are possible negative psychological effects that children may experience during or after their parent’s divorce:

Landon’s parents haven’t been sleeping in the same room in months, his dad is rarely home, and he can definitely feel the tension between his parents, even at his young age.

His mom finally sits him down and tells Landon that her and Landon’s father are going through a divorce and things are about the change.

Within the next few weeks, his mom gets a call from Landon’s teacher saying that he seems mopey and unmotivated at school.

At home, his mother has noticed that Landon complains about physical symptoms quite a bit and often wants to stay home with her instead of going outside or playing with friends.

Landon may be experiencing emotions that are affecting his day to day activities.

His mom will want to monitor Landon to make sure things do not get more serious, such as turn into actual depression or anxiety.

The Psychological Effects of Divorce on Adult Children

The Physical/Behavioral Effects of Divorce on Young Children

Some of the psychological and physical effects can intertwine—but mostly view physical as in physical and behavioral health rather that emotional.

The Physical/Behavioral Effects of Divorce on Adult Children

Anna is 36 years old and married; she just recently found out that her parents, who have been married for over 40 years, are now getting a divorce.

They both individually call her often and talk about the other and her mother has been asking for help financially to pay for legal representation.

Anna feels like she is directly in the middle of things and does not want to be.

Her parents’ behaviors are bringing about a lot of unwanted stress and frustration, which is affecting her sleep and daily focus.

The Spiritual Effects of Divorce on Young and Adult Children

The spiritual effects upon young and adult children are fairly similar but may not be as serious in adults since they are able to think about divorce in a different light than a child would be able to.

Lena is ten years old and her parents recently divorced.

Her father attends church every single week, yet her mother completely stopped once the divorce was final and she was out of the house.

Lena is getting conflicting messages about God and her faith.

She is also questioning why God would allow her parents to split apart.

She begins to not want to go to church any longer with her father.

These three effects of divorce (psychological, physical, and spiritual) along with the corresponding scenarios are just some examples of how splitting apart a marriage can not only affect young children but also adult children—in various ways.

No one should ever stay in a marriage if all other options have been exhausted to try to stay together or if there is any sort of abuse or continuing neglect.

Of course, every parent worries about their children, even adult children, but people are resilient.

Being educated on and aware of the negative consequences of divorce can help limit the negative and harmful effects later on or at least be prepared in order to best help children who are impacted by their parents divorcing.