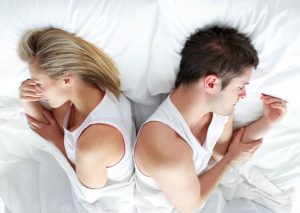 Jesus said, “I tell you that anyone who divorces his wife, except for marital unfaithfulness, and marries another woman commits adultery” (Matthew 19:9, NIV).

The King James Translation of the Bible says, “fornication” where the New International Translation says, “marital unfaithfulness.” Many of us have paraphrased it to simply say “adultery” when we quote it or teach the meaning of this passage. Basically Jesus is saying that a spouse does not have to stay married to someone who has had sex with another person while married to them. A possible reason is that some people simply can’t handle the loss of intimacy and the emotional devastation that can come with an adulterous spouse. The marriage contract is broken by the unfaithful spouse and, according to Scripture, does not have to be reinstated if the violated spouse does not want reunion.

So back to the question that serves as the title of this article. Is sexual neglect grounds for divorce? Based on the words of Jesus, only “marital unfaithfulness” is grounds for divorce and therefore we must determine what warrants the description of “marital unfaithfulness.” The King James version uses the word “fornication” which tells us that the unfaithful spouse had sexual relations with someone other than his/her spouse. The Greek word used for this phrase is “porneia” which is where we derive the word “pornography” and means sexual immorality or illicit sex. Porneia includes incest, prostitution, homosexuality and any other form of sexual perversion (1). Therefore, any sexual participation with someone other than your spouse is “marital unfaithfulness.”

When a spouse commits marital unfaithfulness, the corresponding spouse has been violated and betrayed in a unique and terrible way. This form of violation and betrayal is seen as being so serious in God’s eyes that He grants the violated spouse freedom from the marriage contract if he/she desires that freedom, however it is certainly not required that the violated spouse divorce the violator.

Sex is such an important part of the marital bond that the Bible tells us, “the two will become one flesh” (Matthew 19:5, Ephesians 5:31). Because a person cannot be truly “one” with more than one person, the marriage bond is broken by the “oneness” experienced by the unfaithful spouse with the other person.

Now back to the question, “Is sexual neglect grounds for divorce?”

By “sexual neglect” I’m not referring to the occasional loss of sexual interest that is normal due to the stresses and obligations of life. I’m using the phrase to refer to a spouse who sexually refuses the other to the point that he/she is in danger of temptation. This is also called spousal neglect.

Remember the words of Paul:

…since there is so much immorality, each man should have his own wife, and each woman her own husband. 3 The husband should fulfill his marital duty to his wife, and likewise the wife to her husband. 4 The wife’s body does not belong to her alone but also to her husband. In the same way, the husband’s body does not belong to him alone but also to his wife. 5 Do not deprive each other except by mutual consent and for a time, so that you may devote yourselves to prayer. Then come together again so that Satan will not tempt you because of your lack of self-control. (1 Corinthians 7: 2-5)

Is a husband faithful to his wife if he is not willing to “fulfill his marital duty” to her? Before you answer that question, consider the following question:

The answer to both questions is “no.”

20 You foolish man, do you want evidence that faith without deeds is useless? 21 Was not our ancestor Abraham considered righteous for what he did when he offered his son Isaac on the altar? 22 You see that his faith and his actions were working together, and his faith was made complete by what he did. 23 And the scripture was fulfilled that says, “Abraham believed God, and it was credited to him as righteousness,” and he was called God’s friend. 24 You see that a person is justified by what he does and not by faith alone. 25 In the same way, was not even Rahab the prostitute considered righteous for what she did when she gave lodging to the spies and sent them off in a different direction? 26 As the body without the spirit is dead, so faith without deeds is dead.

The Holy Spirit inspired James to tell us that faith without “evidence” and “deeds” is “useless.” So your faithfulness to God is not determined by what you do not do or who you do not worship, but on what you do and who you do worship.

In the same way, a “faithful spouse” is not defined only by what he/she does not do. A faithful spouse is just as much determined by what he/she does. Marital faithfulness is proactive, not simply prohibitive. Just as much emotional devastation can occur by sexual neglect as with adultery. Research has consistently demonstrated that happy marriages are sexually active marriages and that sexual fulfillment influences all facets of the relationship including romance, conversation, recreation, trust, and acts of kindness.

“Bear with each other and forgive whatever grievances you may have against one another. Forgive as the Lord forgave you” (Colossians 3:13) and “If your brother sins, rebuke him, and if he repents, forgive him” (Luke 17:3).

So don’t feel that you have to quietly endure the neglect, but study this article with your spouse and most importantly, study the Bible. Show your spouse Paul’s inspired words in 1 Corinthians 7 and confess that you are feeling vulnerable to temptation because you are not being sexually fulfilled. Ask your spouse to help you be strong by fulfilling [his/her] marital duty. Then be willing to forgive because you know that a fulfilling marriage relationship is an ever-moving target. Do everything that you can to make your marriage fulfilling and don’t give up if at all possible.

ALSO SEE: Tips To Help You Become A Sex Star To Your Spouse

ALSO SEE: Physical Side Effects of Not Having Regular Sex

ALSO SEE: What Is Limerence?

ALSO SEE: Exhaustion – The Poison To Your Sex Drive

ALSO SEE: Is Your Wife An Emotional Bully?