Help With Controlling and Dominant Spouses 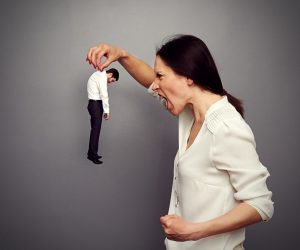 One of the most common reasons for major marital discord is a spouse who feels controlled, disrespected, or dominated by the other.

Interestingly, the dominating spouse often doesn’t believe s/he is being controlling.

No one wants to be treated as a child, especially by the person that is supposed to be our partner…our equal…our mate.

We don’t appreciate being told what to think, how to act, what to feel, or what to believe.

Each of us craves being accepted and appreciated for who we are and as we are.

When we were children, we understood the need for an authority figure to guide us, teach us, and, sometimes, to command us; but we aren’t children and we don’t want our husbands or wives telling us what we must do, think, say, or feel to keep from being chastised or punished…or abandoned.

If you are in a marriage with a controlling spouse, how can you finally put an end to the controlling behaviors without actually ending the marriage? (Also, see our article, “My Spouse Says I’m Controlling”)

The first steps to take when dealing with a controlling spouse are to figure out the ‘why’ and the motivation behind the controlling behaviors.

“I am going to do this because I want to—-I enjoy doing it.”

“I will make dinner every night because I want to and I like eating dinner with my husband.”

“I work out because I feel good afterward and it’s helping me work toward my weight loss goal.”

There are no negative consequences involved in approach motivation.

“I do something to avoid a negative consequence.”

“I avoid or don’t do something because of the response I fear might happen if I do.”

“I put on the breaks when I see a cop while driving fast on the highway.”

“If my husband was demanding that I cook dinner and there was a consequence if I didn’t cook—-then I’m going to cook to avoid his reaction.”

If someone is continuously using avoidance motive, they will eventually build up resentment and there will be even more issues within the marriage.

One of the biggest relationship issues is when someone feels like they are being controlled.

Control is something that is IN the marriage—it is infesting it—to get rid of that, change must happen.

F- fear (ex: Your spouse may be scared that you will leave them; maybe they have a fear of abandonment, which is causing them to act in a controlling manner).

A- arrogance (Your spouse may believe they are better or smarter than you; ex: “I know who you should vote for, so you need to do what I say.”)

R- rigidity (A person’s beliefs or values may be so very strong that they feel you must also have those beliefs; ex: “You must obey me because the Bible says; I am the man of the house and you will submit to me.”)

Other possible reasons: Someone may feel so out of control in their own life and they feel the need to control what they can (spouse or life at home).

A person’s upbringing is another reason for controlling behaviors—perhaps s/he witnessed something growing up, which stuck with them.

There are various ways in which one might try to control another:

The Perception of Control

There might actually be times when someone feels they are being controlled but in reality they are not.

A wife used control on her husband (or bullying) for a very long time in their marriage but then the husband started standing up to her.

Now the wife feels like he is controlling her, but really he is just trying to become an equal in the marriage.

She is perceiving his actions as controlling, when really he is just trying to stand up for himself and do what he needs to do.

If you originally wanted to do something for your spouse, but then unfortunately there is a negative consequence which you didn’t expect, then you might place blame on them and think they were being controlling.

How do you help the situation if you decide to stay with your spouse?

So what will you decide?

Allow the control to continue and be miserable in your marriage?

Or finally take a stand and do something about it?