Why Do People File For Divorce? 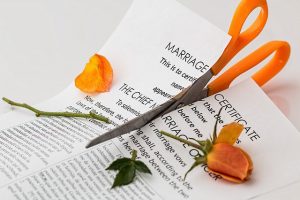 With a divorce rate allegedly at an all-time high, there are obviously many reasons why married couples and individuals choose are choosing that path.

Depending on the situation, some divorces are inevitable and can be seen from a mile away, while others are decided upon when all else has failed.

No matter the reason or situation behind it, the decision can be a hurtful one with long-lasting repercussions.

This is especially true if your spouse is leaving you for someone else, which is one of the most common reasons for divorce.

“I found someone else and I’m leaving you.”

“We got married so young—I now want time to myself to see what else is out there.”

All three of those situations among others all revolve around one basic thought:

“I believe where I am going is better than what I have now.”

Have you heard something similar before or experienced this in your own life?

This other concept or person may be attainable or may be a far-off fantasy, but if you or your spouse believe it is true, then it is, and it can cause destruction in your marriage.

If this is the life you and your spouse are living, there are difficult decisions to be made; do you continue trying to improve your circumstance or do you get out of the marriage?

People divorce because their hearts are hard and sometimes getting out of the marriage is better than being in the marriage.

Let’s take a look at some factors that may influence someone toward divorce:

Childhood experiences (including divorce’s impact on children) can have a tremendous influence on whether or not you are more open to divorce.

No one has a perfect childhood, but unfortunately some are more traumatic than others and sometimes certain things just stick with us that can influence our thoughts, beliefs, and actions later in life.

We develop vulnerabilities and susceptibilities during childhood, which affect how we react and act later as an adult.

A lot of people out there have deep seeded “mommy and daddy issues” that may or may not have been repressed growing up.

There is a possibility that something might occur because of those vulnerabilities.

For example, a child who grew up with an alcoholic parent is much more than likely to become an alcoholic, not only because of genetics but due to the environment they grew up in and what they may have witnessed.

On the other hand, they could decide to have nothing to do with alcohol for the same reasons—because they know they are more likely to become addicted and they do not want to end up like their parent.

Both scenarios are very possible.

There is a high probability that this person will act upon their desire for alcohol since alcoholism runs in the family and they had that as a role model growing up.

If they have access to alcohol, this raises the probability and they are more likely to use.

Let’s look at a more specific example related to divorce:

A woman didn’t get a lot of attention from boys when she was younger, especially by her own father.

Later in life she gets married, however her husband doesn’t act like she is anything special.

An older man comes along and begins giving her attention and she quickly becomes madly in love (in limerence) with this man and wants to leave her husband.

She files for divorce and truly believes God has sent her this other man.

Her husband is distraught and doesn’t fully understand what is going on.

He does not want to complete the divorce and wants to know why his wife is doing what she is doing.

By understanding the reason behind her actions, her husband, who doesn’t want the divorce, has a better chance of changing things so that the divorce doesn’t happen.

He has a better chance to save the marriage.

Knowing that she went through a hard time with boys and men growing up and may not feel adequate would have helped before the affair even began.

If her husband would have known that she was more vulnerable, he could have practiced extra care with her and given her more positive attention.

Maybe he would need to work on himself to figure out why he wasn’t doing that in the first place.

If the spouse ends up trying everything in his power to fix the marriage and his wife still wants a divorce, then he may need to consider it; however, since she is in limerence with the other man, her madly and deeply-in-love feeling will surely fade within time and she may naturally come to her senses.

What would you be willing to put up with?

It can be complicated, but knowing the social and emotional history of your spouse can be very telling and help you to have a successful marriage that does not end in divorce.

Once you have knowledge of their vulnerabilities and past experiences, you will have a deeper emotional and physical connection to your spouse and will be better able to help them through tough times, which is what being married is all about.

ALSO SEE: How to reconcile a marriage.